Snowstrip One: where Ignorance is Strength and Elections are Fair.

Nazi propagandist Joseph Goebbels famously criticized English leaders for telling big lies and sticking to them, describing the “Big Lie” tactic used by the Nazis themselves and many other governments of all political stripes before and since. It’s now also popular with many pundits and columnists, as I’ve pointed out in previous columns.
But in 1949 writer George Orwell took this a step further, describing a perfect totalitarian government which deliberately made statements directly opposite the truth, instead of spinning partial truths, as a way to suppress disagreement. And strangely enough, this Orwellian approach is also something we see in the 21st century, if we look carefully. 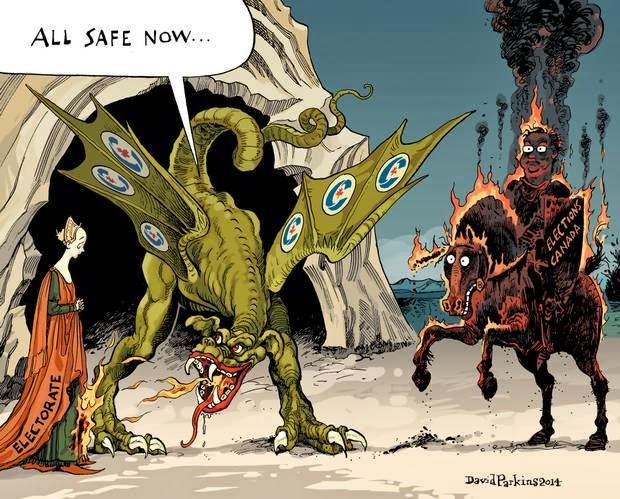 A case in point is bill C-23, the Fair Elections Act, which not only does little to make elections more fair, but actually goes the other way! First, the government claims they consulted with Elections Canada on the proposed changes, yet Elections Canada has clearly stated such consultations never took place.
Next, the government claims this act “closes loopholes to big money” yet instead it relaxes election spending rules, allowing huge fundraising campaigns outside the limits, while upping the individual contribution limit 25%, and letting leadership candidates to put more of their own money into their campaigns. It also cuts out personal loans to local candidates, forcing borrowing only from financial institutions, so decisions about campaign financing will be made by private banks instead of individual citizens. 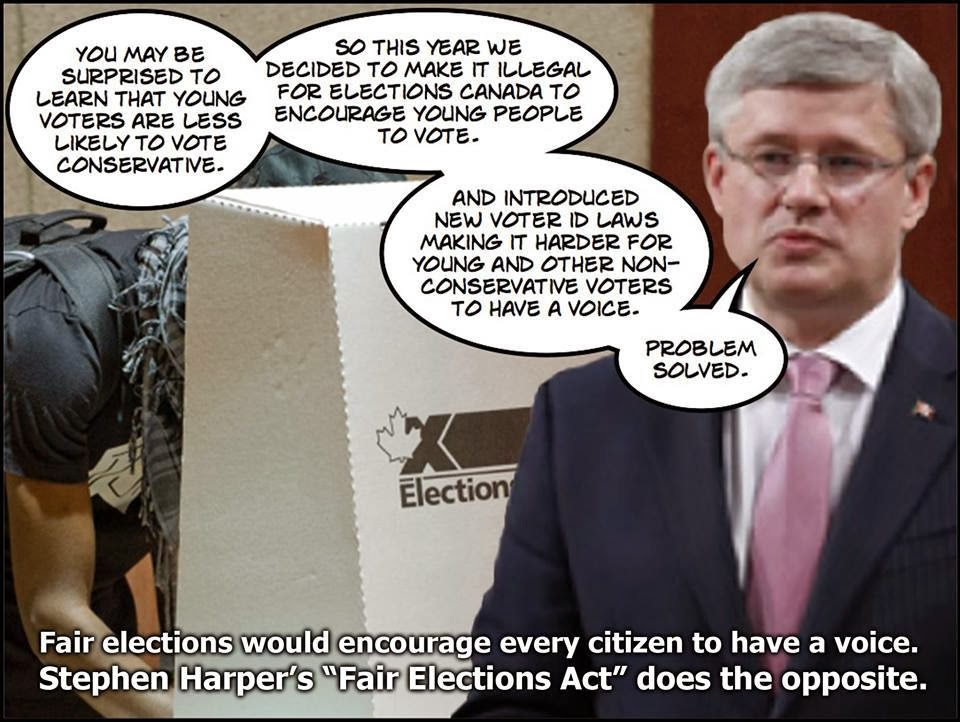 The bill kills the ability of neutral Elections Canada to educate voters or encourage them to vote, particularly groups that vote the least. The current Conservative government even has the gall to blame Elections Canada for lowering turnout, when the real and documented reasons are factors like the tighter voter ID restrictions and unprecedented increase in attack ads we’ve seen under this government. Of course, this bill also removes Elections Canada’s ability to do any further embarrassing research into why people don’t vote. In effect, voter encouragement is now left up to political parties, magnifying the unfair advantage that better-funded parties and their backers already have.
Changes to enforcing election rules are weak or counter-productive. MPs under investigation will now be notified up front while the public are kept in the dark, and can continue to sit in the house until they are convicted and have exhausted all appeals. This means in effect that cheaters can sit for a whole term of government, or longer, before their illegitimate win is overturned; we will have no way to know about it in the meantime, even as the candidate stands for re-election. 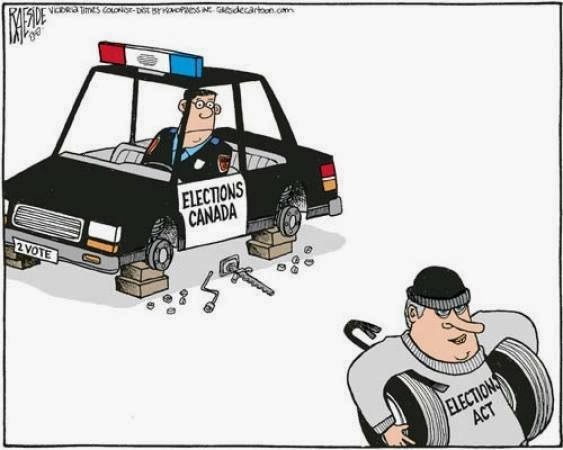 The government has often complained that Elections Canada treats the Conservative Party more harshly. Yet the reality is that although all parties have violated some election regulations, it’s the Conservatives who respond differently when discovered. Other parties, when notified they had transgressed, opened their books to Elections Canada and made restitution. The Conservatives tried to hide their contributions or expenses, denied them, even went to court to drag out the procedure as long as possible until forced to comply.
Of course to top it all off, the government has moved to cut off debate on this bill in the House of Commons, despite having the majority to pass it anyway. It’s almost like they only want the public to know about the bill’s Orwellian name and their own spin, not hear about it from any detractors.
Heaven knows we need fairer elections rules, given the kind of cheating and systemic flaws that have created our current all-powerful “majority” government supported by less than a quarter of registered Canadian voters. But this Act not only doesn’t help, it appears to make things worse, to weaken our already ailing democracy. Can we heed George Orwell’s prophetic warning?
Published as my Root Issues column in the Barrie Examiner as "Fair Elections Act makes things worse"

Erich Jacoby-Hawkins is a director of Living Green and the Robert Schalkenbach Foundation.
Posted by Erich the Green at 10:38 AM