My old friend Technology: why have you forsaken me?

I grew up as a nerd, usually with a better handle on digital technology than my elders, sometimes even a resource to peers. Sadly, that era has passed; now I find technology more frustrating as time passes, or as I age. 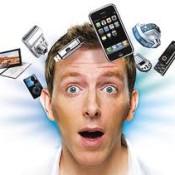 The first big issue is my lack of a smart phone. Self-employed and working from home, with wifi at my desk and lap, I really can’t justify the expense of a data plan. Unlike some, I don’t have an employer to pay it for me; theoretically I could write it off as a business expense, but that’s still not free. So it peeves me to no end that, in this modern world, most handy new software tools exist as “apps” for phones rather than software for real computers.
Except I do put apps on my computer, to help family. My daughter saved birthday, Christmas, and allowance money to buy an older iPod we then discovered can’t handle the current version of iOS most apps need. If she’s lucky, the app she wants run an older version, but only if I first visit the AppStore from my computer and “get” the app there. So now I have an AppStore account, but even this work-around tragically only works around half the time, earning my endless enmity for all things Apple.
My other daughter has a tablet originally obtained for educational games like Plants vs. Zombies or Minecraft. Instead, she spends every online moment watching videos of other people playing games, a pastime her parents find incomprehensible and annoying. Worse, she has taken to watching videos during car rides, which we discovered halfway to Grandma’s Easter dinner had rapidly burned through the data allowance of our car’s wifi, preventing me from working online on long drives, the whole reason we had the plan!
Barrie’s Public Library is on the bleeding edge of new tech. They only had a recent bestseller I really wanted in electronic formats. I don’t own an e-reader and don’t enjoy lengthy reads on a computer screen, but with an old mp3 player gathering dust I consented to “signing out” the book-on-tape version (read by Wil Wheaton). Easier said than done. The first file to arrive was EPUB, apparently an e-book. I downloaded and installed software to “read” it, only to find all I had was a 33-page sample! So then I had to sign up for, download and install OverDrive to access the actual recording, which turned out to be 15 hours long! With the sound file now in my computer, I connected my mp3 player for something to enjoy on my daily walks. Surprise! Even with the files on my device and playable from it through my laptop, the mp3 player itself can’t “see” the files unless I install them with Sony’s special software. After 45 minutes of installation and a full system reboot, then a 20-minute Google search to overcome a known bug, and another 10 minutes to re-transfer, I finally have a listenable book in my pocket. Now all I need are better headphones to block traffic noise. At this point I suspect I could have read the hardcover in less time than it took to find, install, and use all the software to download it!
Meanwhile, the smartphone world continues to insult my cheap burner cellphone (mainly for emergencies) by forcing me to constantly send or receive text messages using a horribly unhelpful interface. I suspect it’s all a plot to enslave me to the smart phone data plan rip-off…


Published as my Root Issues column in the Barrie Examiner as "Tech world tough to navigate"
Erich Jacoby-Hawkins is the vice president of the Robert Schalkenbach Foundation.
Posted by Erich the Green at 4:46 PM