And now for the good news: renewable energy growing by leaps and bounds 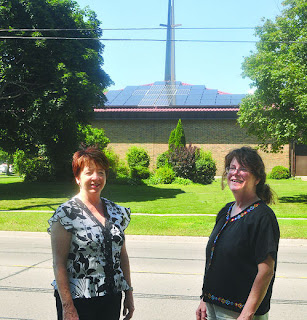 Grace United Church minister Dr. Rev. Susan Eagle, left, and board chairwoman and environment team leader Bette McCracken stand near the solar panels installed on the church roof earlier this year.  J.T. MCVEIGH PHOTO
With so much bad news about fossil fuels, whether climate change, rail disasters, pipeline spills, or poisoned water, it’s nice to shift gears and talk instead about the progress of renewable energy.
And the news is amazing! For some reason media focus on the fossil battle, with proponents cast as supporting jobs and growth and opponents cast as being anti-industry or anti-economy. The job and economic growth of renewables is the untold story.
On the local, national, and international scale, the good news is all over. When Al Gore trained me about Climate Reality this summer, he presented some stunning facts about the growth of green energy. Did you know that, in 2010, investments in renewables exceeded investment in fossil energy? This was the culmination of a decade of expectation-exceeding growth. The wind capacity installed worldwide by 2011 was 7 times what had been predicted 10 years prior, and growth in the solar market is now 17 times higher than projected just a decade ago. Clearly, around the world, renewables are the untold economic success story even as we obsess about pipelines, fracking, and other dirty energy.
Meanwhile, renewable energy gets cheaper and more efficient. Solar prices dropped 99% over the past 35 years and are still trending down, while the cost of wind has dropped by half just in the last 4 years! Part of this progress stemmed from subsidies, yet support for clean renewable energy is still dwarfed by subsidies for already-profitable fossil industries, including a failure to make them account for their own pollution. But renewable policies have proven successful: wind is already one of the cheapest new generation sources worldwide, with solar also at grid parity (as cheap or cheaper than hooking up and buying off the wires) in a growing number of countries.
One of the criticisms of renewable energy is the need for backup or storage. Luckily, that field is advancing, too. Just the first half of this year has seen 38 new advanced energy storage projects launched, including 29 different storage technologies already in use. One of the most exciting is in Lake Ontario, where excess energy will be used to pump air into balloons on the bottom of the lake, to be withdrawn to drive turbines when energy demand exceeds supply. This technology is simple, safe, and cheap enough to profit from the daily price differentials in our existing market.
The solar-powered community of Okotoks, Alberta gets 90% of their heat from the sun. We can see the enthusiasm right in our own community as we notice more homes, businesses, and churches sporting rooftop solar panels, providing secure local electrical supply and keeping our dollars circulating locally.
The progress of green energy is so promising that it’s been calculated we could shift the entire world to all-renewable supply in just 20-40 years, at the same cost as would otherwise be spent on conventional dirty energy. All it requires is political and social will, which means if you want a clean, sustainable future, make your elected representatives aware of that desire, and adjust your energy use and buying decisions accordingly. Between citizens, business, and government, we are proving a bright, fossil-free future is possible!


Published as my Root Issues column in the Barrie Examiner entitled "There is proof a bright, fossil-free future is possible"
Erich Jacoby-Hawkins is a director of Living Green and the Robert Schalkenbach Foundation.
Posted by Erich the Green at 8:22 AM